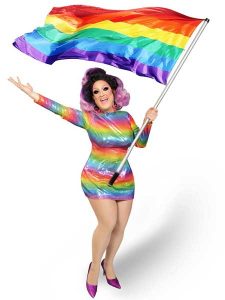 With a career spanning over twenty three years, Kevin Levesque as Miss Conception, has been delighting audiences around the world with his unique style of female illusion – “a Female Delusionist® if you will”, as Kevin puts it.

From her beginnings in Toronto’s bar scene, to sell out audiences wherever she appears around the world.

Miss Conception’s one-woman, live singing shows, launched new each year in Puerto Vallarta, Mexico and Provincetown Massachusetts, parody and celebrate some of the greatest characters, movies and TV shows of our time, featuring on-stage transitions from one character to another, with costume change that happen before your eyes.

Miss Conception travels internationally and has opened shows for comedian Leslie Jordan (Will and Grace) and singer Lorna Luft (daughter of Judy Garland) and has worked alongside Tony award-winning actress Jennifer Holliday (Dreamgirls). Other credits include Second City (Toronto), being featured on ‘Queer as Folk’ and ‘Degrassi: The Next Generation’, and having the distinction of being the first contestant on Wipeout Canada to ever run the course in full drag.

On the high seas, Miss Conception is in demand as a featured performer on ocean and river cruises throughout Europe (Spain, Greece, Turkey, Portugal, Prague, Budapest, Italy, and France) with Brand G Vacations and Concierge Travel.

When not touring, Kevin Levesque donates his spare time raising money for Until There’s A Cure. This is one diva that’s taking the world by storm.

“Miss Conception does not raise the bar. She IS the bar.” 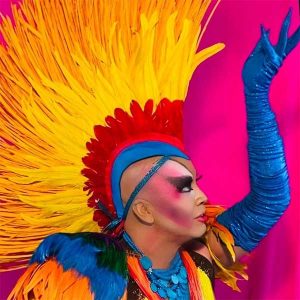